t makes it possible to correct, build or rebuild a beard in an aesthetic and permanent way.

The beard graft is carried out in the same way as that used for hair and scalp implants, with the objective of reconstituting or densifying a beard or of correcting a scar of the beard or the mustache. The most commonly used procedure is the hair graft of the follicles taken from the scalp in the back region. These follicles, once isolated, are implanted at the level of the beard to be treated in accordance with a diagram previously drawn with the patient. 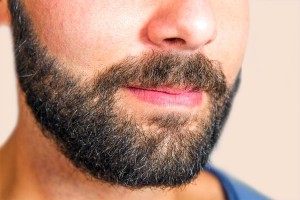 Harvesting of hair follicles can be done following two methods:

Without shaving but with the removal of a strip of scalp from a few centimeters on the back of the scalp, dependent on the number of necessary hair implants. The strip, once taken, is cut into hair grafts of 1 or 2 follicles. The sampling area is completely closed to leave an almost invisible scar.

with a pre-shave before sampling of follicles by follicular extraction. This is done on the back of the head. The grafts of follicular units are taken one by one using a hollow needle of 0.8 mm in diameter. This method has the advantage of leaving small discreet scars and almost invisible to the naked eye but any hair removed from the back will be lost permanently.

Whatever the sampling method used (FUL or FUE), the implantation technique can be carried out either by the Choï Implant Pen or by insertion of the implants one after the other with microsurgical forceps after needle pricks.

Drawing in pencil with the patient makes it possible to define the zone of beard to be treated and the hair area to be sampled.

The first part consists of preparing the follicular grafts either by the FUE technique or FUL technique.

The second part consists in implanting, with fine needles, these follicular implants at the level of the beard, respecting the direction and most natural aesthetic look.

No dressing or bandage will be applied to the beard.

Total absence of beard or mustache

Medical assessment before the beard graft

A medical check-up prior to the procedure must determine the cause of the balding of the beard. A preliminary drawing of the beard as it is to be corrected will be done in agreement with the patient and the number of beard implants will be calculated.